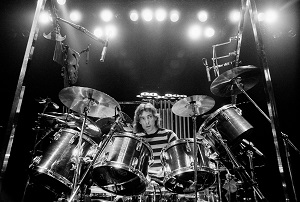 If you’ve read any of these posts over the years, you know I like to connect rock music and family business one way or another. Earlier this month elite rock drummer Neil Peart, of Rush fame, died.

I’ve been a Rush fan since 1980 and have been mesmerized by the speed and complexity of Peart’s drumming and the deep, meaningful lyrics for which he was mainly responsible. Often known as “nerd rock” or “cerebral rock,” Rush quoted Shakespeare and Ayn Rand and made other literary and philosophical references while also penning lyrics of their own that were frequently deep and loaded with meaning. They gave thoughtful teens all the power of hard rock and a cerebral stimulation that left us Rush fans feeling understood and less alone.

The three members – Geddy Lee, Alex Lifeson and Peart – were all known as virtuosos. While Peart was drumming in concert, Lee and Lifeson would often use their feet to manipulate pedals adding to bass guitar and lead guitar respectively. So much sophisticated noise from only three guys.

In 1994, after 20 years with Rush consistently winning awards from Modern Drummer, receiving numerous accolades, and always in the running for best rock drummer of all time, Peart decided he needed to learn more.

He performed in a 1991 memorial concert for the legendary drummer Buddy Rich which left Peart feeling inadequate. “I bluffed my way through it,” he said.  Peart actively sought out ways to grow and learn and better contribute.

He saw drummer colleague and friend Steve Smith go through a period of growth in his drumming style and ability and Peart inquired about it. Smith referred Peart to his mentor Freddie Gruber (a contemporary of Rich’s). Working with Smith, Peart recalls, “feeling like a beginner.”

Leaders in non-family businesses can surely benefit from this kind of intense self-evaluation, searching for and commitment to growth. Without a doubt, top leaders in all kinds of businesses do just that. One of the key family business differences is the availability of many avenues allowing access to family members without necessarily having the qualifications of potential hires from outside. I frequently run into underqualified family members in my work with family enterprises.

A founder can start a business, include any or all of the children in simple ways at the beginning. With significant growth and a generational transition of ownership, you can have siblings co-owning and co-leading equally out of a sense of “fairness” with very different abilities to contribute. Even with very large businesses in the third or fourth generation or beyond, this dynamic can continue.

This resource of committed family members can be a competitive advantage if, and only if, the family members look for ways to evaluate themselves and improve their ability to contribute. Successful families do not become complacent, and they have a culture around and expectations for development. They are learning families.

The family businesses I engage with who generate and grow and diversify have a Neil Peart mindset.