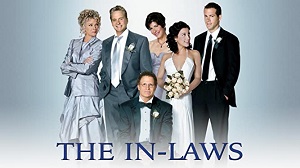 In-laws. They marry into our families, and we marry into theirs. Immigrants from one family to another.

If you’ve followed this blog for a while, or know me personally, you likely know that my family’s commercial printing business was sold long ago. But when I was in college, I had to decide to enter the family enterprise or go my own way, and I went my own way for several reasons. Top among these: knowing the best chance I had of maintaining a good relationship with my dad was by not working with him (successful!) and not loving commercial printing (great reason to NOT go into the family biz!)

So, in my family’s case, we did not have to deal with in-laws, either as employees or owners. And we were also spared the stress of grappling with the influence they could have had on me and my sisters if the three of us siblings had become owners. Yes, even when not technically involved by ownership or working in the business, in-laws have all kinds of dynamic power.

In my consulting work with enterprising families (many have operating businesses and others do not but are tied together through real estate, investments, foundations and trusts), I see up close the dynamics of in-laws as they enter a complex system of family relationships and joint ownership and management of family assets. In my experience, especially in the last decade, families are more open to involvement of in-laws in a variety of ways, ranging from working directly in businesses, to gaining ownership, to helping manage assets, to generally participating in family meetings as independent voices, and many other ways.

I do, though, still run into families who prefer to keep in-laws out of ownership and are not open to their voices. I can say with confidence, keeping in-laws out of formal involvement does not lessen their power or effect! (Not to mention that keeping them out of ownership can put them in a position where their own children are wealthier than they are, which is another topic for a future blog.)

Recently, my brother-in-law, Jon, stepped up with the suggestion to clean out all the old, unwanted “stuff” accumulated in my mom’s basement. Jon is married to my older sister and was my fraternity brother at the University of Delaware in the early 80’s. I introduced him to my sister hoping they would hit it off, and 33 years later–mom’s basement…

Mom’s basement was loaded with all kinds of cast-offs that should have been donated or thrown out. There was also some important stuff that we wanted to keep, and Jon understood that. What struck me was my emotional reaction to him stepping up to make the project happen. I felt a sense of closeness, being part of the same family team and feeling taken care of in an important way. Jon was not some guy who married into our family but was clearly a part of it. This project would no-doubt save us all a major hassle in the future, when our focus will be on mourning and we will not want to have to deal with a major clean-up effort.

At the same time, I experienced conflicted feelings. It was as if an outsider had stepped into “my family,” and I was curious about these mixed feelings while simultaneously being overwhelmed with appreciation. I felt some guilt, as if I was less of a son for not taking the lead on this project deeply affecting the woman who gave birth to me. Was I falling short?

Ultimately, we did the clean-out and it was deeply satisfying for all involved. Mom sat in a comfy chair making all decisions about what to keep and what was to be donated or put in trash. While I had mixed feelings during the process, the majority of them were of appreciation and a closer sense of family with Jon. And the feelings that were not appreciation were my own insecurities for me to manage.

These are some of the normal and complex feelings stirred up when people marry into another family. Complexity exists even when there is no family business or other types of shared wealth. And it is certainly compounded when various assets are shared among family members.

While there are no simple and easy rules to follow when considering if and how to include in-laws in a family’s enterprising efforts, my experience (personally and professionally) tells me that the effort to incorporate them is worth it. And not including in-laws in some way often leads to festering problems which negatively affect family unity and business/financial success (and there are a range options for including them if desired).

For another take on in-laws, which dovetails nicely with mine, I am sharing a post from Marvin Blum’s blog.

Marvin is a Texas attorney with a strong sense of the family-dynamics side of shared wealth. (He is not related to my wife, Monica Blum, the “Blum” in “Blum & Savlov, LLP”, which has caused confusion over the years, as we play in the same sandbox of family business/wealth.)