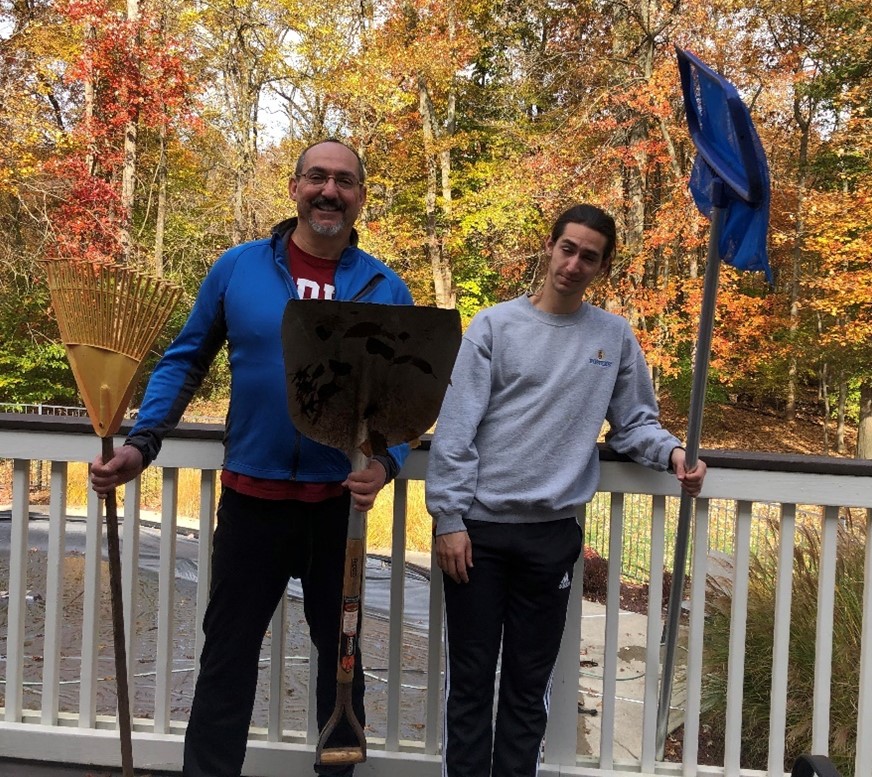 Stories of fatherhood can be embarrassing. They are often instructive. For me, this tale has been both.

I’m a parent to sons ages 23 (Jeremy) and 20 (Matthew). The older and wiser they get, the less intelligent I seem to be. I’m getting used to it.

We have a pool in our backyard and we closed it for winter in late September. It has a huge tarp over it. In NJ this time of year, there are lots of leaves. Also, plenty of rain so leaves are wet – makes sense, right?

I go out the other day for my ritual of using the pool brush (long brush at the end of an extended pole) to push all the leaves into a big pile at the end of the pool cover so I can remove them. Simple enough. I use my usual and perfected process: After pushing all the leaves into a pile, I take an old plastic rake and a large, metal scoop shovel (usually used for scooping and spreading mulch). Standing at the edge of the pool, I rake a bunch of the wet leaves onto the shovel and then lift the shovel and spill the water off while holding the leaves on the shovel with the rake. It is very heavy at first but as the water drains, it gets lighter. Then I dump leaves in wheelbarrow and repeat.

This is how I’ve done it, year after year. This year is no different – until the laughter starts…

Fatherhood… Jeremy is outright whooping aloud at the clueless old man. Being a glutton for punishment, I ask, “What is so funny?” He explains that he knows I am concerned about anything sharp poking a hole in the pool cover and freak out at that possibility and then proceeds to mock my use of a rake (although, in my defense, it had plastic tines!) and an old metal shovel with jagged edges (sounds bad as I write it).

I begin to defensively support the successful track record of the current method (while my own internal voice begins laughing in much the same manner as Jeremy was moments ago.)

More laughter – outside of my head – Jeremy again. I’m sensing humiliation coming my way. I brace for it and forge ahead.

I ask him what he thinks would be a better method and I’m sincerely interested since my wife and I have funded his engineering education. He should be able to put it to good use right now. He points out that we have scooper made specifically for removing leaves from the pool when it is open. It is a smooth, plastic rectangle with a bag of netting attached and it clips to the pole mentioned previously.

I’m developing my defensive and knuckle-headed response but manage to take a deep breath, calm a bit, and remind myself to stop talking and listen. A good first step. I know I should walk-the-walk that I encourage and coach all week long with the senior generation of my family clients in business and legacy wealth circumstances.

Step back and allow the rising generation to show what they can do.

Let them make mistakes and learn from them.

Be open to some surprising successes as they do things differently, and often better, than the generations before them.

So, I step back, and Jeremy smoothly scoops up a bag of leaves, easily holds it up for a few seconds as the water drains out of the netting (without getting wet and filthy like me), and then easily transfers the leaves to the wheelbarrow with a deservedly smug and self-satisfied smile plastered across his face.

He did all this with no risk of puncturing the cover. I kiss him on the head, thank him, beg him to take a pic with me to use on this blog since that is what every 23-year-old loves (yeah).

Whether you are part of a business family, legacy wealth family, or average family trying to raise productive kids of character, the senior generation has lots of wisdom to offer and mentoring to provide. We also need to show humility and give the rising generation enough room to show their stuff – even if it means mistakes now and then. I felt the need to push back and defend my way of doing things with my son and I often see my clients do the same. When I followed my own advice and backed off and gave him some room, he stepped up and contributed in a really positive way. This is what a parent hopes for. What can be challenging for the senior generation (as was for me) is the feeling of not being as needed as much as one was earlier and coming down off the pedestal the younger generation had us on for so long.

The next generation will not always have a better way and they will make mistakes. This is how they learn. If we want to develop a productive next generation of character, we need to mentor, teach and provide them a wide array of experiences when they are young while gradually stepping back so they can learn, grow and gain competence independent of us.

When they step up and make us proud, it is important to let them know directly they had a better idea than we did and thank them for it. A kiss on the head is cool too, when you can get away with it.