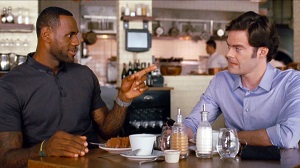 In the movie Trainwreck, Lebron James (playing himself) and Bill Hader (playing Dr. Aaron Conners) are in a scene having lunch together. When the check comes, Lebron suggests they split the check according to what they each ate. Aaron is shocked that LeBron James, a rich and wealthy basketballer, will not simply pick it up.

LeBron’s response, “It is better for our friendship…Equals forever.”

Watch the scene for yourself (only 50 seconds).

While the movie is an Amy Schumer-written comedy, it hits on a serious point for wealth creators and inheritors: wealth discrepancies can strain friendships.

In one family I worked with, a young inheritor in college had friends struggling to pay for tuition, food and books. He wanted to be generous and helpful and often took the crew out for nice dinners including wine; these were places his friends could not afford. He was happy to do it. As time went on, he found they stopped even offering to pay when they went for a cheap burger or beer. He fell into a trap of always paying and he became resentful. He also noticed his friends had resentment toward him, including him when they wanted him to pay and not as often at other times!

LeBron’s truth in the movie is about money, power and relationships. The challenges are real for wealth creators and inheritors.

For those who are inheriting money created by parents, grandparents or even more distant family members they never knew, families often develop a culture of silence around it, teaching kids not to discuss it with their friends as they grow up, in college and beyond. Depending on where they live, often they are surrounded by other families in similar situations. Some families choose to live in socio-economically diverse areas where they might be “outed” as wealthy and different from most or all neighbors and friends and try to conceal their financial success.

When wealth creators develop their wealth when kids are young adults, it is possible that friends and neighbors notice various changes that clue them into the wealth, particularly if the creators make certain choices (expensive cars, home remodeling, move to an expensive town nearby, exotic vacations, etc.) The choices can be honest and humble ways to enjoy the fruits of financial success or showing off to others what they have accomplished. In either case, the dynamics of this financial success, when others suspect or outright learn about it, can lead to awkward situations and conflict born of envy.

In the previous example of the inheritor at college, parents had not provided wisdom about these dynamics and the school of hard knocks stepped in. I was engaged to work with the parents, son and younger daughter and facilitated discussions of many scenarios and the pros and cons of various choice points. A short list of topics:

There are no easy answers to the complex dynamics around money and relationships, particularly when there are imbalances. What I have found time and again in my work with business families and legacy wealth families is that missed opportunities to open communication with the rising generation and help them make sense of the challenges tend to be painful later on.

In the last few years, I have been engaged by wealthy couples for my Purposeful Legacy Family Project in higher numbers than ever before. What is most promising about the trend is that some are reaching out before they have kids or before their kids turn five. They want to think these issues through well ahead of time and look for developmentally appropriate ways to prepare children for a stewardship mindset around family wealth. And there is plenty to do at even the youngest ages.

The old tradition of not discussing wealth until someone dies and their kids are in their 60’ and 70’s is vanishing because it throws the next generation into the deep end of wealth education with no foundation. More recently folks are seeking the resources to help them be proactive and harness the power of wealth to serve their families in ways they define with thoughtful intention.

LeBron, you are onto something…